Pop'n Music Wiki
Register
Don't have an account?
Sign In
Advertisement
in: Articles with untranslated information, Characters, Females,
and 8 more

I can't afford to say that right now

With my gun, I won't lose to anyone.

This world that's been taken over by robots

Elenoa is one of the characters from Pop'n Music 17 THE MOVIE.

そう遠くない未来、コンピューターによって管理された社会に走る一抹の光は希望か、それとも絶望か…
Not so far into the future, a single light shines in a computer-controlled society. Could it be hope? Or despair...?[1]

Elenoa arrives in the present from the future, that is corrupted and dominated by robots. In Pop'n Music Lapistoria, Elenoa wields a white, pear-shaped lapis.

Elenoa has orange eyes and red, neck-length hair with blunt bangs. She wears a white mini dress with matching gloves and boots. She wears dark grey, thigh-length pantyhose, a black scarf around her neck, and carries a pistol. Her original palette is confirmed again in 戦場のアップデート, from Pop'n Music Lapistoria.

Elenoa has periwinkle hair that matches her eye color, along with a slightly intense skin tone on her 2P alteration. Her is dress is now pale-dark mauve, her stockings are walnut brown, and the rest of her attire is white.

Pop'n Music Lapistoria:
革命の旗の下、戦場に走る一筋の光。
或る者には希望に、また或る者には絶望のように焼き付いた…
Under the flag of revolution, a ray of light runs across the battleground.
It gives hope to some, and despair to others...[2] 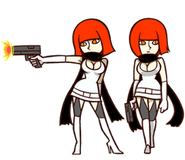 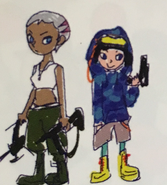 With a boy that would soon be reworked into Bit.