Edward is one of the CS characters from Pop'n Music 2.


ベイビィギャング
近所のベイビィの元締めらしい！！？
A sexy baby in the neighborhood for the gals!
He may be a bit of a baby's world,
With a baby gang,


Does he seems to be the neighborhood's bossy baby!!?

Edward is an infant with a single tuft of yellow hair and peachy skin. He sports a pair of glasses with red lens and a white frame. His outfit is a pink teddy bear costume with a sky-blue-colored bib and pacifier. His original color palette has been used again in the long version of Prelude, from Pop'n Music 9, and Progre, from the ee'MALL of Pop'n Music 10.

In his 2P color palette, Edward's glasses and hair remain unchanged, but his costume is shifted into black, and his bib and pacifier are orange. His 2P color palette was also seen in Prelude, from Pop'n Music 3.

Edward now sports sky blue colored diaper and a hood that contains bright green rings, instead of bear ears. His glasses have a red frame with black lenses. On his back are a pair of yellow, heart-shaped wings. Edward sports two green bracelets on each wrist, and black shoes with yellow hoops. His bib is white with a blue highlight.

Edward's 2P changes his diaper, bib, and hood to black. The rings on his wrists, shoes, back, and hood are all magenta, and his glasses are white with yellow lenses. His pacifier is white and he also gains black socks.

Pop'n Music 20 fantasia:
バブー！(ヘイヘイ！カノジョ～、一緒に踊らない？)
おニューのスーツをバッチリキメて、スーパーベイビーは今日も無敵だぜ！
Baboo! (Hey hey! Girl, don't you want to dance with me?)
With a perfect texture for my new suit, the super baby is invincible today! 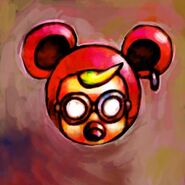