Eclipse is one of the characters from Pop'n Music Lapistoria. He wields a white, jewel-shaped lapis.

Eclipse doesn't seem to have a true personality; instead, he comes from the crescent moon. One of his animations hints that he "collects" the Tsugidoka! characters' lapises, though we don't see him stealing the rest of the lapises.

Eclipse's appearance is that of a mysterious, grim reaper-like figure with a gray color scheme. His face is hidden, and masked by a dark gray sheet with a hat that is attached by black bands. The rest of his attire includes a suit of armor, boots, a tattered cape, and white gloves with black sections.

His 2P colors all of his attire pitch black, and the bands around his hat are blue. Other parts of his outfit also gain blue sections, and his gloves remain white. 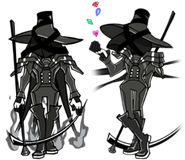