Chiyoko is a character from Pop'n Music 10.

空と海と人とを島唄に秘めて歌う唄者
鳴けば面影ぬまさてたちゅり
A singer who sings poetry about the sky, sea, and the people hidden on the island.
It's a shame that nobody hears it.

Chiyoko is an Okinawan girl. She likes to stroll by the sea.

Chiyoko has tan skin and black hair covered by a blue head wrap. The rest of her hair is pinned above the wrap with an ornament. She wears an ankle-length red robe with light blue trim, as well as a light blue belt around her waist and no shoes. Her dark blue haori is long and covers her hands. Her WIN animation shows that Chiyoko carries a red flower ornament on her pin.

In her 2P color palette, Chiyoko's skin darkens, and her hair transforms into a cream blonde color. Her entire robe is colored blue with red highlights, and her entire clothing is colored purple. 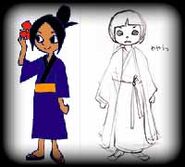