Chamel, or Chanel, is one of the characters from Pop'n Music.

元モデルというウワサもあって、スタイル抜群。
パリのモンパルナス通りのカフェのオーナー。
サングラスの下の素顔をめったに見せない年齢不詳の謎の美人。
There's a rumor that she was a former model with an excellent style.
Being the owner of a cafe on Montparnasse street in Paris, she's a beautiful and mysterious woman of unknown age who rarely shows her face behind her sunglasses.

Chamel is a tall woman with long and wavy brown hair. She sports a pink top with a white collar and a plunging neckline, a white miniskirt, and a simple black belt. Her boots are white and knee-length, and have thick cream colored heels. Her eyes are hidden behind a blue and white pair of opaque glasses.

In Chamel's 2P, her skin tone darkens and her hair shifts to black. Chamel's outfit becomes shades of blue, such as a navy blue top and a light blue miniskirt. Her boots and glasses also become light blue, and her heels are deep orange.

Chamel makes cameo appearances in Emilio's FEVER!, Lose, Win, and FEVER WIN animations. She's seen working at her cafe wearing a pink low-cut shirt, a white skirt, white boots, an apron, and her usual glasses, although they are no longer opaque. She's also portrayed as a thief, wearing a black leather mini dress, black boots, and a mask. In this cameo it's shown that Chamel has cyan colored eyes.

Chamel's 2P palette is used in Emilio's 2P as well, wearing all blue attire, though the apron and boots remain the same. Her glasses are tinted purple as well and her eyes are black. Her thief attire is colored entirely blue.

ブーツのデザインに凝っていて全国的に大人気！ それから、外国で画家を目指している３姉妹の末っ子がパリに里帰りしているんだって。
Her boots' elaborate designs are nationally popular! After that, the youngest of the
three sisters who was aiming to be a painter in a foreign country is now coming home to Paris.

Her old name in the arcade version of pop'n music 1, Chanel, is part of Coco Chanel's name, who was a French designer and founder of the Chanel brand. Her name was later changed to Chamel in its CS counterpart, avoiding copyright restrictions. (Despite this, the original name is still viewable on the official Pop'n Music page for the song.) 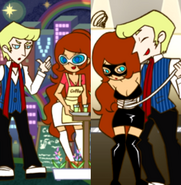 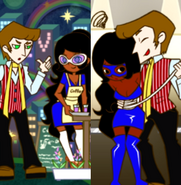 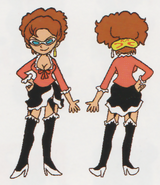 A beta Chamel design, described as her work attire

Other unused designs from the first and second games, possibly for Chamel or KoKo
Add a photo to this gallery