Collecting memories of the stars on his disk

The moment a star disappears

Canopus is one of the characters from Pop'n Music Sunny Park.

宇宙をめぐる伝説のスペーストップブリーダー、
フライングディスクに星々のはじまりと終わりを刻む。
A space top breeder whose legend is all over the universe,
His flying disc engraves the stars from beginning to end.

Canopus is a legendary breeder who's known across space, and is always with his dog. His flying disc has the ability to collect memories of stars. Somehow, he and Nova seem to know each other.

Canopus is a pale skinned man with black eyes and wears a dark gray uniform with four blue buttons and a white midsection and sleeves, while the pants have a light gray midsection. He has dark blue gloves, a belt, and thigh high boots. Lastly he wears a blue shako hat with a light blue badge and a dark blue visor. The hat extends into a blue gradient cape. He is shown to have a pet dog made of light that's yellow with cyan eyes and ears.

His 2P colors give him black and gray pants, as well as a black cape and hat. His shirt and visor are both red, and his gloves, boots, and belt are white. The badge on his hat and his buttons are now yellow. His dog is inverted in color, now being cyan with yellow eyes and ears.

His special 3P palette shows him in a blue uniform with a white midsection. The visor of his hat is blue as well. His buttons, boots, badge, and the underside of his cape are all light red while his belt, hat, and gloves are white. His dog is shifted into a darker yellow with cyan eyes. This palette is used for SYMPHONY FROM ZERO from Pop'n Music éclale.

Canopus is likely named after the star Canopus (also known as Alpha Carinae), which is one of the brightest stars in the night sky and part of the constellation Carina.

3P Win
Add a photo to this gallery 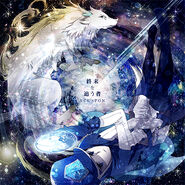