CHERNOBOG is a Slavic deity, whose name means "black god".

Everyone, this song is really difficult.
My advice to everyone.

Do steady training one week before...
First, go on a high-protein, low-fat diet.
Then, every day, do 10 pushups, and 10 sit-ups, to train your abs and triceps to prepare for battle.
After that, sleep well.

By the way, I have failed this song more than 10 times. 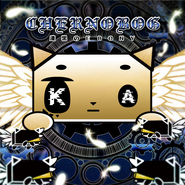