Bronson is one of the characters from Pop'n Music 9.

俺は漢としてどこまでも垂直に行きたいんだ。どこまでもさ。ヨロシク！ I want to drive as fast as I can, and go anywhere and everywhere I want to go.

Bronson is a single father who likes cars and motorcycles. He likes to take his son on motorcycle rides.

Bronson is a typical grizzly bear. In his 1P Palette, he has brown skin and wears sunglasses over his brown eyes, and has blond curly hair. He wears a red floral design shirt, and has white shorts. His son, Bronson Jr., has a white skin and black hairs. In his 2P Palette, Bronson's skin is yellowish, and has purple hair. His floral shirt is now purple and his short his red. Bronson Jr. has now a black skin and his hair are green. 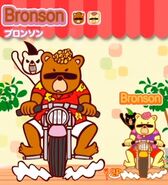