It was decided early on that I would compose two songs for REFLEC BEAT. "I would like a trance song with a sad melody and foreign vocals, similar to Colors" was the request I received from Yoshitaka. As he is someone that has done so much for IIDX, I do not think I could bring myself to refuse his request, so I tried my best. However, it caught me off guard when I heard that this was going to be used for the last song. At the time, the growing quality expectations had left me anxious throughout the production, but listening to it now, I am rather pleased with how it turned out.

pop'n rhythmin difficulty rated from 1 to 10. 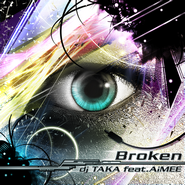