This article focuses on the Pop'n Music character, Boy. Please see the disambiguation.

Collecting games. I have games from all over the world (CS1)/But nowadays there's a lot of shitty games (CS2)/Maybe I'll make one myself (CS3)

Recently an old game is my favorite! (CS2)/I was even able to get a girlfriend! (CS3)/Still online games! (CS6)

Boy is one of the CS characters from Pop'n Music.

3Dメガネが大のお気に入りで、
見るもの全てを赤と青にしてしまう。黄色いバナナも赤く見える？
His 3D glasses are a big favorite of his,
they make everything look red and blue. It seems that even yellow bananas look red to him.

Boy is a wealthy British video game guru and businessman who owns many arcades and makes and develops his own video games. On the Vocal Best cover, he is seen driving a car with Sugi-kun and Reo-kun in the passenger seats, and teasing women. In Pop'n Music 3, he finally got a girlfriend but it's never stated who she is.

Boy is a pudgy man with a blond bowl cut parted in the front, an upturned nose and wearing a pair of white 3D glasses, obscuring most of his face. He dons a simple red suit with a yellow collar and brown clogs.

His 2P palette gives him orange hair, paler skin, and his suit is now light gray. His shoes are black and his collar is orange. His 2P is used in Pop'n Music 2 CS for Funny.

Boy's 3P color keeps his orange hair from his 2P, but his suit is now all black and has a white collar and his shoes are brown once more. This palette is used again for Dreamy in Pop'n Music 3 CS.

Boy's 4P changes his hair to light blue, and his suit is all orange with a white collar and red shoes. It's used in Pop'n Music 5 CS for News.

Boy's attire remains identical to his debut, although his hair is now orange. He has an orange suit with a white collar and worn with purple shoes. He keeps his 3D glasses as well.

In his 2P coloring, his suit becomes green with black shoes, and his hair is lime colored.

Boy appears with blond hair once more, drawn in a rocker style. He sports a purple and white plaid suit with a navy blue collar and black shoes, along with several different pop outfits.

In Boy's 2P palette he regains orange hair, and his suit is deep magenta with white shoes and a yellow collar.

３Ｄめがねが大のお気に入り！！
見るもの全てが赤と青！黄色いバナナも赤く見えちゃう？！
His 3D glasses are a big favorite of his!!
Everything he sees is red and blue! Even that yellow banana looks red!

夏休みのゲーム大会でみごと優勝！アートスクールの女の子にも大人気なんだ。
でも一回戦で破った相手がリベンジを狙ってるよ！？
He was the winner of the summer vacation gaming tournament! He was very popular with the girls at art school after that.
But someone who lost in the first round is plotting revenge!?

今年の冬は家族でスイス旅行なんだって。「クリスマスは静かなほうがイイからね」
This winter, he's taking a family trip to Switzerland. "Christmas is better when it's quiet."

最近オンラインゲームにハマちゃって
一日中プレイしてるんだって。
でもポップンパーティは出席に二重マル！！
He has recently become addicted to online games.
I heard he plays all day long.
But it's important that he attends the Pop'n Party!

ピコパコサウンドに誘われて、話題のアイツがアーケード進出。
最近の自慢は自作のハイパー・ハンディー・ゲームマシーン、その名も“ウルトラボーイ・アドバンズ”。
24V駆動（単三電池20本分) でどんなゲームも動く最強マシンだ。
He was invited to Piko Pako Sound, an advanced arcade everyone has been talking about.
Recently he's boasting about his own Hyper-Handy-Game Machine, called the "Ultra Boy Advance"
With a 24V Drive (for 20 AA batteries), it's the strongest machine that can run any game.

イギリス出身の天才ゲーマー。最近は自作ゲームマシーンのパワーアップに夢中なんだって。
自称ライバルのシルヴィーには対戦を挑まれてるらしいよ。
A British-born genius gamer. Lately, he seems crazy about the power-ups in his home-made game machine
His self-proclaimed rival Sylvie seems to have challenged him to a match.

アートスクールの女の子に大人気のボウイ。グームがとっても上手なんだ！
Boy is popular with the girls at art school, because he's really good at games!

Great
Add a photo to this gallery

Boy playing with Tsukuba
Add a photo to this gallery

Boy's appearance in the first game 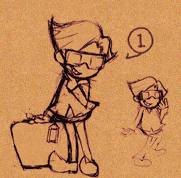 Reward for beating every Expert course in Pop'n Music 2

Boy in the Ee'MALL icon in Pop'n Music 17 THE MOVIE.

From Pop'n Music 19
Add a photo to this gallery