This article focuses on the BeatStream character, BisCo. If you are looking for the Pop'n Music 9 character, see Bisko.

Hard levels on each game

地球から22億光年離れた惑星B-10からやってきた猫耳型アンドロイド！
「音の鳴る動く絵」をあつめるために毎日地球を探検してるよ。
A cat-eared android who already came from 2.2 billion light-years away from planet Earth!
She has been exploring Earth everyday to gather "music-sound motion pictures".

BisCo is a cat-eared android, who originates from the planet B-10. It is 2.2 billion years away from our planet, Earth. Everyday, she explores around Earth, collecting sounds for motion pictures.

Notice of the thief BisCo! BisCo-chan came to Pop'n Music, by playing along with the music! Welcome.

We were allowed to fun animation created for the anime draft to the designer's BeatStream team.

BisCo has a very cute, peppy voice as I am, and it was so much fun. Although her breasts are very large! I see! And I nodded to think about that. While I was going that I tried to yell "Why".

Since I received also motion data from the animation game making a gorgeous anime, Takahashi's lab appeared, charactering everyone mustering in a Win action! Also Shishamo appeared in connections with it leading from Pop'n. Please by all means try to anime check by all means in the play~!

BisCo appears with chartreuse eyes and light-orange pigtails with the tips possessing yellow, lime and cyan ombre; her right pigtail is longer than the opposite. She possesses white-fuchsia cat ears with film tape embedded on her head. BisCo dons a white, sleeveless miniskirt with yellow, vertical sections with a gray belt buckle hanging on a pink disc, along with a pair of white handcuffs and gray shoes with fuchsia, cyan triangular buttons.

BisCo's name was a shortened version of biscotti. 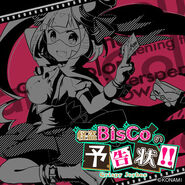 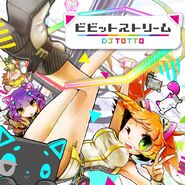