Everything is a pleasure theory

I wonder if I can whistle well? I feel like I was being possessed.

※ Denotes chart has been revised from the corresponding AC chart: 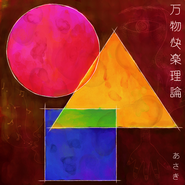