Bamboo is one of the characters from Pop'n Music.

ファンキーでクールなダンステクには多くの女性が心をうばわれている。
トレードマークの星メガネは、ファンクの天使から授けられた宝物？？？
日本人パパとのハーフなんだよ。
Many women are fascinated with his funky cool dance technique.
The star glasses are his trademark, are they a treasure that was granted from the angels of funk???
A person of mixed parentage with a Japanese father.

Bamboo has a love for dance and music, and is rarely seen without his trademark glasses. He appears in the first Pop'n Music game simply as a rival character, but in later games became a main character for the Expert Courses between Pop'n Music 6 and Pop'n Music 8. He's known to be a childhood friend of Sylvester.

Bamboo is a tall man with a giant pink afro and blue and yellow glasses with a star design, hiding most of his face. He wears an open red vest with white boots and gloves and cream colored pants, while the back of his vest says "PEACE" with a smiley face. His gloves have a yellow fringe, and his boots have similarly yellow heels. He also has a yellow peace sign necklace.

Bamboo's 2P gives him apricot colored skin and light blond hair, and his glasses are now black and yellow. His vest is purple and worn with light pink pants. His boots and gloves keep their color. It's used for the ee'MALL song Disco a Gogo.

Bamboo now appears a main character, with his appearance remaining mostly identical to his debut. His pants now have stars for buttons however, and have a red, black, and green design at the bottom.

His 2P palette makes his afro a bright green, and his pants are a light mint green with his vest becoming cerulean. The other parts of his outfit keep their colors.

Bamboo now dresses in a cream colored outfit with a large red collar and a gold chain necklace. His belt, wristbands, and boots are all white with star motifs and red and yellow designs.

His 2P is similar to the first game, with light skin and blond hair. His outfit is a lavender hue with a purple collar and dark blue glasses His wristbands are sky blue with pink fringe, and the star on is belt is pink as well. His boots remain white with yellow heels, with the red stars becoming pink.

Bamboo dons a gray vest with yellow pants and white shoes. He has a red belt with matching red spiked wristbands, and wears a magenta feather boa around his neck. This palette is used again in Re:Unite the Night from Pop'n Music éclale.

His 2P color gives him light blond hair once more, and his skin tone is slightly lighter. His vest is light orange with white pants, light pink shoes, and green glasses. His wristbands are also pink with red spikes, and his feather boa is black. This palette is used for Tribal, and ee'MALL song.

Bamboo sports a red, circus-like outfit with white frills on the sleeves, waist, neckline, and at the ends of his pants. His sleeves and pants also have a yellow trim, and his boots are white with yellow soles. His glasses remain the same, and his hair is decorated with white pearls and glitter.

Although Bamboo's TV/Anime design has no full 2P, it has a 2P icon used for Chara-Pop. It shows him with green glasses and blue hair.

2P select icon
Add a photo to this gallery

Bamboo in the first game

Bamboo in Pop'n Music 13 CARNIVAL for the "My Best" category

Select icon for Expert Course in Pop'n Music 6 and 7 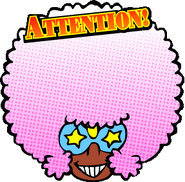