The time changing from day to night. I enjoy lighting up the lamps

Crispy things. There is no joy in eating them...

Albireo is one of the characters from Pop'n Music 13 CARNIVAL.

月のない夜に現れる白い森。その奥にはふしぎな料理店があるそうな。
空き地の猫に聞いた話。
On a moonless night, a white forest appears, with a mysterious restaurant hidden in the depths.
A story about a vacant land I've heard from a cat.

Albireo is the waiter of a restaurant hidden away in a forest, only visible on moonless nights. In Pop'n Music Lapistoria, he is an unlockable character in Fuga's story, Fuga, the Cat, and the Hurricane (風雅と猫とハリケーン, Fuga to Neko to Harikeen?), and he wields a yellow diamond lapis.

Albireo is a bipedal, medium gray cat with large red eyes. He wears standard waiter attire, consisting of a black suit top with four gold buttons, teal lapels, and a white collar with a red neckerchief. His pants are teal, and worn with knee-high white socks and plain black shoes.

His 2P recolor shifts his fur to blue and his eyes to lime green. His top is dark red with a green neckerchief, and his pants are salmon colored, matching the color of his lapels. His socks and shoes remain unchanged.

Albireo now wears a an olive green vest with light brown shoulder sections over a long sleeved white collared shirt, adorned with a lime green gem. His ears are hidden by a brown cap with three darker lines in the front, and his capris are dark brown with a gray belt and black shoes. In his FEVER! animation, Albireo wears waiter attire once more, with a light blue top decorated with gold buttons, a white collar with a blue bow tie, and dark gray pants. In his Lose animation, Albireo seems to revert to a normal gray cat.

In his 2P palette, his vest and capris are colored blue, and his cap is similarly colored with a darker blue section, lined by white stripes, and his eyes are once again lime green. His shirt remains white, though the gem on the collar is light blue.

Albireo is is the 5th brightest star in the constellation Cygnus. Albireo's name may also be a reference to Kenji Miyazawa's novel, Night on the Galactic Railroad. Additionally, the characters of the story are portrayed as cats, much like Albireo. 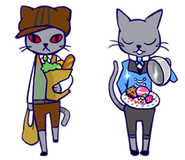 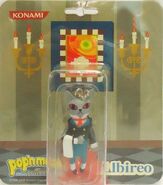