Akane is one of the characters from Pop'n Music Lapistoria.

まるで子供のような、烈のおばあちゃん。
継承されるその力にはまだ秘密が隠されている…？
Retsu's grandma, who looks just like a child.
Is there still any hidden secret about that inherited power...?

Despite looking like a little girl, Akane has all the wisdom that comes with age. Whether it's giving advice or simple understanding, she knows just what someone needs in order to support them.

She has the power to control fire much like Retsu, so she tried helping him train to improve his abilities. She's a bit of a drunkard, and is almost always seen carrying her large sake gourd.

Akane appears as a young girl with deep orange eyes and light orange hair tied up in a white bow. She wears a white and blue top decorated with orange streamers and white pom poms over a black shirt with mid-length sleeves and white trim. Underneath she wears blue shorts with white socks and sandals.

Her 2P changes her hair to a light bluish black, and her eyes are dark blue. Her outfits becomes shades of green, gray, and black, and the streamers on her top are blue.

In her Change Card from the Pop'n Music éclale vol. 3 card collection, Akane seems to have been dressed up by Minit's. She wears a frilly light blue and white dress, with yellow accents and dark blue bows. 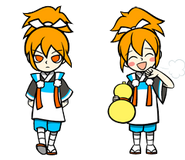