Akagi Takayuki is one of the characters of pop'n music 5. His alter ego is Pop'n Red (ポップンレッド, Poppun Reddo?).

普段はゲーセンでバイトをしている彼。バイクいじりで鍛えた筐体メンテナンスのウデは一級品！でも時々どこかへいなくなっちゃうんだ。どこで何をしているのかな！？
Everyday, he has a job in a game parlor. The housing maintenance arm that is trained in messing his bike are a trimmer! But, it longer have to be somewhere at the time. I wonder what he's doing somewhere?

Akagi Takayuki is known for his light brown eyes and flair hair. He sports a red jacket with yellow accents and a platinum emblem, white pants with a black belt, and navy blue boots. His accessories are a pair of fingerless gloves with a platinum scanner located on his left wrist. He could be shown in a gray shirt with red borders sometimes. His original palette is recycled in 爆臨!!イナカイザー!! from pop'n music éclale.

Akagi's 2P palette gives him dark brown hair and eyes, along with a slightly altered set of colors: black for his accents, brown for his boots, cyan for the pieces of metal, and light denim blue pants. 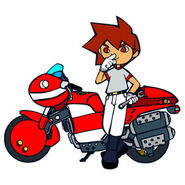