ALT is one of the characters from Pop'n Music 8.

Her upgraded self that appears as of Pop'n Music 19 TUNE STREET is referred to as ALT 2.0.

TVの中からコンニチワ☆
コンピューター電子アイドル「ALT」ハートフルデビュー。
Hello from the TV☆
It's Computer Electronic Idol "ALT" in her heartful debut.

ALT is an AI in a robot body described as a "computer idol". She is a cheerful girl with a love for singing and doing cute poses. Despite not being human, she is described as being a very normal girl. Her start-up sound and catchphrase is "Hello, darling!", and she's very fond of it.

In Pop'n Music 20 fantasia, ALT 2.0 falls victim to Zizz's computer virus and is in a corrupted state.

This is ALT-chan, produced by Seiya Murai. She's finally made her debut with her charming computer voice. Ladies and gentlemen, please cheer her on by all means!

For whatever reason, ALT-chan is fully loaded with heart beams. If she's happy, she'll wink and lots of hearts will come out. If she's sad, she'll short circuit and smoke will come out. ALT-chan is a computer girl who is no different from an ordinary girl on the inside. But perhaps that behavior is calculated entirely thanks to the computer.

Because an image had already solidified in Murai-san's mind, I went ahead with the design while following along with that.
Both naming her 2.0 and the monitor with a convexly curved surface were requests from Murai-san.
I got a lot of ideas, and she received a version update with a retro future flavor!
That may seem like a contradiction, but I think it landed in a nice place.

In the anime, ALT-chan became the poster girl for maglev trains.
It's a concept which introduces a wonderful future.
It would be a little nice if she were there at a pavilion somewhere at EXPO '70.
Because I love the female convention guides' uniforms from those days and because they're so cute,
ALT-chan was also given a Cosmo Corps look.

When maglev trains start running in Japan as well,
would it already be nostalgic of me to think it'd be nice if the staff have that kind of uniform?
I think it'd be quite cute!
And if a maglev line is made, I wonder if people in long-distance relationships can meet in no time at all.
I can arrive at your city in a whiz in TOWN MODE as well☆ (← In ALT-chan's voice)

The cute Electronic Idol ALT-chan is in some kind of pinch!

Please play well so that ALT-chan will meet you with a smiling face at the finish (clear)!

Maybe I shouldn't write this myself, but don't you feel a little pressured if I say that...?

No, never mind, I'm going to do my best to improve just a bit for ALT-chan's sake~!

ALT is a humanoid robot with a rectangular monitor for a head. The screen of the monitor is aquamarine, and displays her face. The rest of the monitor is white, and over it is a pink headset and antenna. Her orange hair goes just past her shoulders and sweeps outwards. ALT wears a white sleeveless dress with pink trim on the collar and bottom. There is an arrow key design on the left side of the chest. She wears long white boots and gloves, and a purse that resembles a computer mouse.

ALT's 2P color palette changes her headset and dress to be chartreuse, while her gloves and boots remain white. Her monitor is colored sky blue instead of aquamarine, and her hair is a redder shade of orange. Her 2P has been used for A.I. Kids in ee'MALL from Pop'n Music 10.

In her TV/Anime song コンピューターおばあちゃん from Pop'n Music 9, ALT's design is unchanged, but she is depicted in a pixelated style.

ALT wears the same clothing as she did previously, but the pink parts of her design are now sea green. Her monitor is completely black, and her mouth is the only visible facial feature. Her skin where visible is also pitch black.

ALT is now upgraded, renamed as ALT 2.0, and has a new, modified outfit. Her sleeveless dress stays white, but there are turquoise designs added: Rectangles on her chest, concentric circles on the sides, and a vertical stripe down the center. The trim and collar of the dress are pale blue. Her boots are turquoise with a white stripe. Her gloves are now shorter, and are white with turquoise trim. ALT's headset is colored pink, white, and black, and she has a light blue router with a pink antenna on the left side of her head. This color palette is also used for エアポートシャトル from Pop'n Music éclale.

In her 2P palette, ALT 2.0's dress, head, and gloves are all yellow. The turquoise and light blue parts are changed to navy blue. Her headset and antenna are the same red-orange as her hair. Her skin tone is slightly lighter and her monitor's screen is cyan.

ALT 2.0's corruption is visible on her screen, which is mostly purple but has glitchy chunks of mint green and black. Her eyes are the same mint green. Her skin is much paler and her light orange hair is disheveled. Her sleeveless dress is dark grey and has a higher collar, and the top and bottom trim are red. On her chest is a green "no" symbol. Under that is a horizontal red stripe, and two vertical ones extend down from under it. Her long black gloves have a red diamond on the back of each hand. She wears black tights under red shoes with crossed straps. Her headset remains pink and black, but her antenna is crooked. In her Win animation, her dress reverts to a sea green hue with white accents, and her hair and skin return to their normal colors. Her antenna is fixed, her screen is no longer corrupted, and her hair is neat again. The "no" symbol changes to a red power button icon.

ALT 2.0's 2P coloring changes her monitor to cyan and orange. Her hair is grey and her dress and gloves are navy blue. The red accents of her dress are changed to bright green, as are her shoes. Her eyes and headset, as well as the "no" symbol and the diamonds on her gloves are all now red-orange. Her stockings remain black. In her 2P Win animation her dress is light red with white highlights, and her stockings and headset are deep red. Her hair is yellow and her monitor screen is light blue.

今日は天気がいいから、ちょっとむこうのほうまで冒険してみよう！
The weather is nice today, so let's go on a little adventure way out there!

コンニチハ。電子ノアイドル、ALTデス☆
私ノ歌ヲ、聞イテクダサイネ。ユビートノ中カラ、アナタノタメニ、歌イマス☆
Hello. I'm the Electronic Idol ALT☆
Won't you listen to my song? It's from Jubeat, I'll sing it just for you☆

あなたとワタシの街。あなたとワタシのハート。
離れていても電子の力で接続しちゃいマス☆
Your town and my town. Your heart and my heart.
Even if they're far apart, we'll be connected by an electronic power☆

コンピュータウィルス【ZIZZ】が電脳世界に侵入！？
誰かタスケテ！ALTが消えちゃう？
The computer virus "ZIZZ" has invaded cyberspace!?
Someone help me! Is ALT going to disappear? 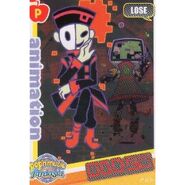 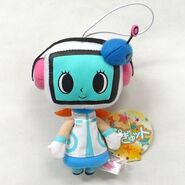 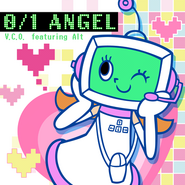 Hint: Found next to the smaller logo on the cabinet