2st is one of the characters from Pop'n Music 10 and the second member of the Miracle 4.

来年公開をめざし、「サイバーアラビアン」いよいよクランクイン！銀幕デビューに胸躍らせながらも、
張り切りすぎてちゃって監督に怒られっぱなしな毎日。 ま、負けねえぞ！
Aiming to be released next year, "Cyber Arabian" is finally being filmed! Even though he's excited about his silver screen debut, he keeps being scolded by the director due to being overly excited. Oh, I won't lose!

2st is the second member of the Miracle 4. He is known to be a movie star.

2st is a tan-skinned man with brown eyes. He sports a white turban that covers his left eye and is draped around his neck. Around his head are a pair of metal goggles. His outfit includes a lavender-colored robe, a purple vest, and metal shoes. 2st wields a large dagger, and his right hand is cut off and replaced with a robotic hand. Around 2st's chest is a blue scabbard. 2st's original palette is used again in KHAMEN BREAK, from Pop'n Music Lapistoria.

2st's 2P color palette recolors his turban light blue. His vest is olive green with lighter trim, while the rest of his clothing remains unchanged.

2st's first appearance in Pop'n Music 8 shows his attire to be slightly modified. A yellow headband is wrapped around his turban, his robe is white, and his coat is colored in a lavender hue. 2st sports a pair of light brown sandals instead of metal shoes. His robotic hand is also noticeably absent in his first appearance.

Force's FEVER! Win animation in Cyber Rockabilly gives 2st black clothes of white. His hair is also shown to be gray, and his turban is colored red. 2st's skin tone is darkened into a brown hue, and his sandals are gray and red as well. His eyes are black instead of brown.

2st also has a minor cameo in the Pop'n Xmas animation from Pop'n Xmas 2004 ~Tenshi Noutagoe~. He wears his original attire from Pop'n 8, although his headband is decorate with gold stars. A roast turkey is held on his dagger.

In Uno's Dance and Win animation in Pop'n Music 14 FEVER!, 2st's appearance is much like that of his first one. He once again wears plain sandals and his right hand is no longer robotic. He wears a red gown under the main part of his vestment, gold bracelets, and has a small amount of chin stubble.

Uno's 2P color palette alters 2st's clothing into shades of yellow. 2st's skin tone is colored brown, and his eye color is pale forest green. He has orange sandals and light cream colors on his outfit, and a goldenrod color on the rest of his clothing. 2st's sword is colored blue.

In Pop'n Music 17 THE MOVIE, 2st appears once more in Force's Win and Dance animations. In his Dance animation, 2st is shown with an outfit similar to his debut, albeit with yellow goggles, a blue jewel decorating his turban, and gray pants and sandals under his robe. He keeps his robotic hand as well. In Force's Win animation, his attire seems to return to its Pop'n 10 design, as he regains his older goggles.

In 2P Force's Dance animations, 2st's attire shifts into blue. His goggles remain yellow and his sandals gray, and the hilt of his dagger is red. In 2P Force's Win animation, 2st returns to his original 2P palette from Pop'n 10.

2st makes an appearance on the Dance Dance Revolution jacket for Cyber Arabian, wearing his original attire from Pop'n 8, combined with his newer goggles.

2st is simply a portmanteau of "2" and "first", noting that he is the second member of the Miracle 4. 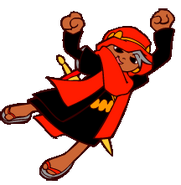 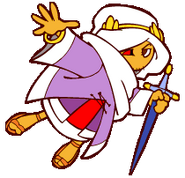 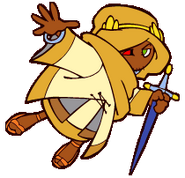 2st in Pop'n Xmas
Add a photo to this gallery 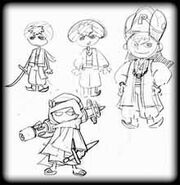 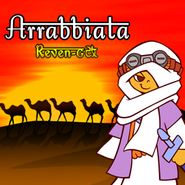