BlackY here. Thank you very much.
The fighting season came this year again.

In KAC music contests I always made fast and faster songs but this time I tried to decrease the BPM. This is also a soul. 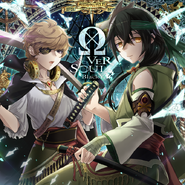