The powerful sound of five acoustic pianos weaving together. Is it an ensemble? Or is it a battle!?

pop'n music difficulty rated from 1 to 43 through pop'n music 20 fantasia, and 1 to 50 from Sunny Park onwards.

※ The notecount of this chart is different from the old 5-Buttons chart (total notes: 237).

pop'n rhythmin difficulty rated from 1 to 10. 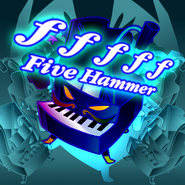